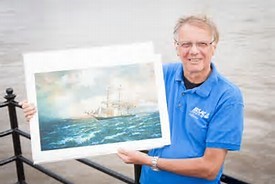 A scuba diver who spent years exploring one of Wales’ most important shipwrecks, which sunk in a storm while carrying £120m worth of gold, has been honoured for his work.

Author Chris Holden has been appointed as one of Britain’s first Wreck Champions by the British Sub-Aqua Club (BSAC), which is the UK governing body for snorkelling and scuba.

The accolade is in recognition of decades of dedication to the wreck of the steam clipper The Royal Charter, which sank off the beach of Porth Helaeth in Dulas Bay on the north-east coast of Anglesey more than 150 years ago.
Chris of Higher Kinnerton, North Wales, spent years researching the history and human tragedy behind the story of the ship, which sank on October 26, 1859, with the loss of at least 459 passengers and crew.
Chris is co author with Lesley Holden of the book Life and Death on the Royal Charter The True Story of a Treasure-Ship wrecked on Anglesey. 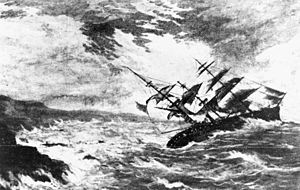 The Royal Charter was a steam clipper which was wrecked off the beach of Porth Alerth in Dulas Bay on the north-east coast of Anglesey on 26 October 1859. The precise number of dead is uncertain as the complete passenger list was lost in the wreck although an incomplete list (not including those who boarded just before departure) is retained in the Victorian Archives Centre in, Victoria, Australia. About 450 lives were lost, the highest death toll of any shipwreck on the Welsh coast. It was the most prominent victim among about 200 ships wrecked by the Royal Charter Storm.

The Royal Charter was built at the Sandycroft Ironworks on the River Dee and was launched in 1855. She was a new type of ship, a 2719-ton iron-hulled steam clipper, built in the same way as a clipper ship but with auxiliary steam engines which could be used in the absence of suitable winds. The ship was used on the route from Liverpool to Australia, mainly as a passenger ship although there was room for some cargo. There was room for up to 600 passengers, with luxury accommodation in the first class. She was considered a very fast ship, able to make the passage to Australia via Cape Horn in under 60 days.

She was also carrying a fortune in gold estimated at over £100 million, but the passengers also included many miners who had struck it rich in the Australian goldfields who were carrying more gold in their personal possessions. Much of the gold was recovered by Victorian divers as the wreck is in relatively shallow water and significant amounts have been recovered over the years since the tragedy and it is thought that there could still be more in the sea bed.

Coincidentally this is the 150 anniversary year of the foundation of the shipping forecasts, created as a direct result of the huge loss of life and shipping in the storm that sank the Royal Charter.