A talk by Professor Ian Morison on February 22nd 2018

Now an icon of British science and technology, the Lovell Telescope has stood over the Cheshire plain for 60 years. The talk will tell its story; from its troubled beginnings, its role in the space race and some of the exciting discoveries it has made. Following two major rebuilds in its life, it is now better than at any time in its history and looks forwards to an exciting future. 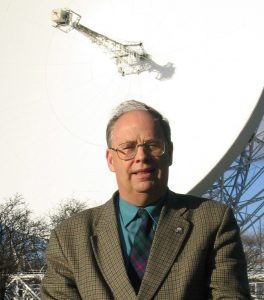 Ian Morison is an astronomer who served as the 35th Gresham Professor of Astronomy. Though a radio astronomer by profession, now in his 51st year at the Jodrell Bank Observatory, he has been a keen amateur optical astronomer since making his first simple telescope with lenses given to him by his optician when 11. In 1990 he helped found the Macclesfield Astronomy Society of which he is now patron and he is a past president of the UK’s Society for Popular Astronomy, remaining on its council and acting as its Instrument Advisor. In 2003 the International Astronomical Union named an asteroid after him citing his work at the Observatory and public lecturing.

He writes a regular ‘Telescope Topics’ column for ‘Popular Astronomy’ and has made many contributions to the ‘Sky at Night’ and ‘Astronomy Now’ magazines. Cambridge University Press have recently published three of his books including ‘A Journey through the Universe’ covering our current understanding of the Universe and he has just begun to write an ‘Astronomy Digest’

See (www.ianmorison.com) for articles of interest to amateur astronomers and update the CUP books.