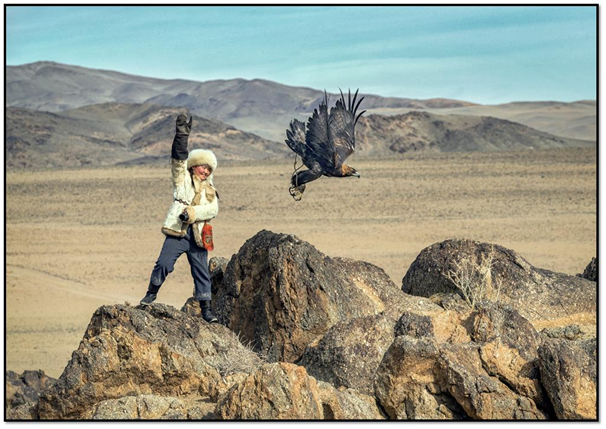 In late winter, 2018, John and Rosamund Macfarlane, very keen travellers and photographers, returned to Mongolia to travel in Central (Buddhist) and Western (Muslim Kazakh) Mongolia. The talk will provide an intimate glimpse of the life, work and culture of the nomadic people of rural Mongolia. 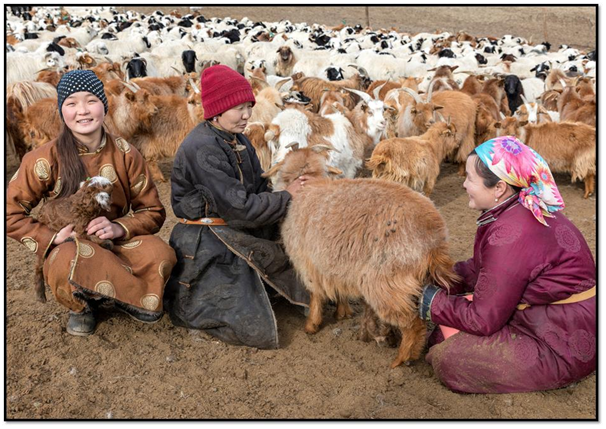 They travelled over the roadless terrain in an old 4WD Russian van with two companions and two guides, sometimes on ice and snow. They visited and lived with several families in their isolated gers, where they tend to their animals in this sparsely populated, barren and mountainous landscape. Their animals are essential to the family’s wellbeing and survival through the long harsh winters. In spite of their hard life, the nomads preserve their culture of hospitality, food, dress, animal husbandry, and traditions such as hunting with eagles. They stayed with three separate Kazakh eagle hunting families in the Altai mountains in the far West of Mongolia, where the skills of keeping and flying eagles are passed down the generations, and they accompanied them up into the mountains on horseback to watch eagles being trained and hunting.

This way of life is increasingly threatened by climate changes and the pressures of ‘modern life’, and over half of Mongolia’s population now live in the overcrowded and highly polluted capital – Ulaanbaatar –  in central Mongolia.

The talk will be richly illustrated by photographs and videos and will weave a story about this uncommonly visited country. 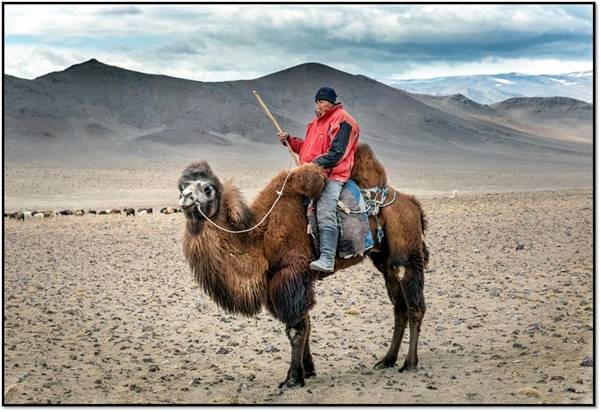 John and Rosamund Macfarlane moved to lovely Loweswater, one of the smallest and least frequented parts of the Lake District in December 2008, after John retired as physician and Professor of Respiratory Medicine at Nottingham. Rosamund took up photography seriously over 20 years ago after retiring from medical research work and John has developed his skills over the last decade.

Since then, both have continued their passion for photography, mountain walking, wildlife and travel, which form the basis of various talks.

In recent years, trips have included: Chile, the Falkland Islands, rural Mongolia in late winter, Hokkaido, and mainland Japan in winter, Ethiopia, several treks in the Himalayas, including the hidden valley of Zanskar in the northwest Indian Himalayas, Iceland in winter, Antarctica, the Arctic (both Svalbard, and Baffin Island and the NW passage), Ecuador and the Galapagos, Botswana and South Africa, and Colorado in the fall. They also enjoy regular trips to Scotland, often in the winter to photograph wildlife.

Both have had pictures ‘highly commended’ in the British Wildlife Photography Awards.  Rosamund was a finalist in the very prestigious Wildlife Photographer of the Year [PotY] (2015), out of over 42,000 entries from around the world, also in the RGS Earth Photo competition, and shortlisted in Bird PotY. John was awarded a second place in category in the Scottish Nature Photography Awards and has been shortlisted in Outdoor PotY and Travel PotY. Both have been awarded numerous ribbons, medals and awards in international photographic salons.