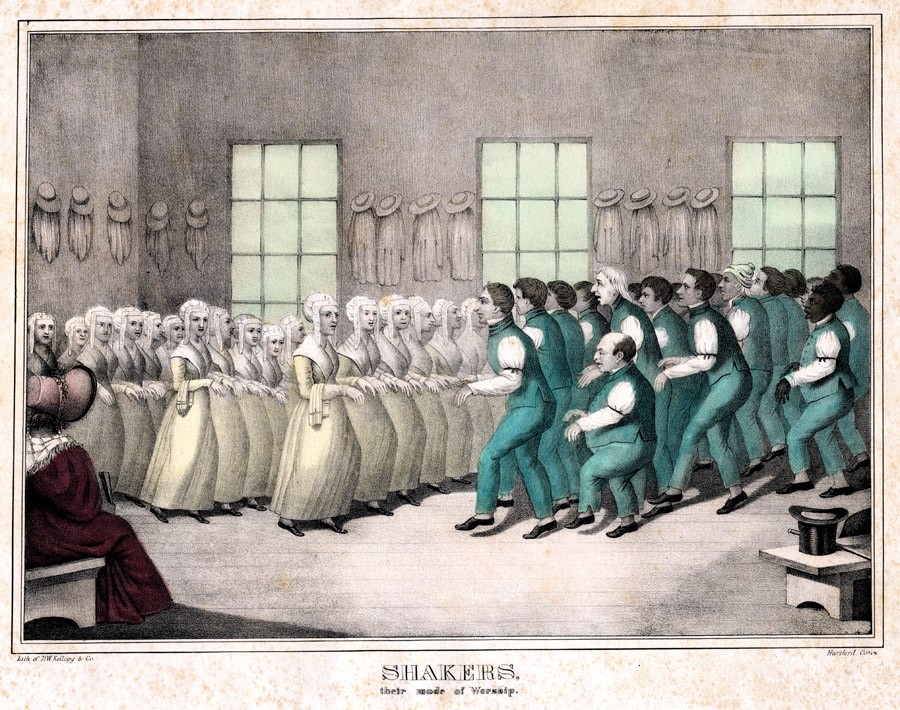 I am providing a more detailed introduction to this theme as the Shakers are not well known outside the United States, or at best we may recognise them through the current fashion for Shaker style kitchens and furniture. In North America however, there is tremendous interest in all things Shaker. In the last twenty years several museums have been established on the former sites of Shaker settlements and each of these receives thousands of inquisitive visitors every year. When genuine examples of Shaker furniture come to auction they fetch prices far in excess of fine European examples of a similar period. If examined more closely this furniture is rather plain or even austere so what is the attraction and why is it so popular and so highly valued?

The Shakers or Shaking Quakers as they were derisively called, were a small group of religious dissidents that grew out of Quakerism and had their origins in mid-eighteenth century England but they are much better known as a successful nineteenth century North American fundamentalist sect. They established themselves initially in the north eastern states in agrarian communities as they attempted to build Utopia, or as they saw it their Heaven on earth. By the middle of the nineteenth century there were some 5000 Shakers living in twenty communities spread across ten states, today they have all but disappeared but their influence has not.

In this engaging talk John tells the extraordinary story of the Shakers, exploring their beginnings, what they believed and how they lived their lives before examining examples of their wonderful buildings and furniture. For it is only with such an understanding of their devout faith and way of life that we can begin to appreciate the beauty of their intriguing legacy.